Some Thoughts on Videogame Violence

Last week we were invited by Ubisoft, a gaming software company, to their San Francisco office to check out their lineup of games for Nintendo DS before they are released this holiday season. They mentioned role-playing games and nurturing animal games that boys and girls can play, so I was intrigued. Besides, I can never resist a sneak peek, so off we went.

We were greeted at the lobby by this: 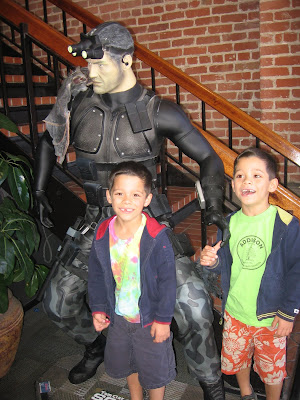 I have to say, this made me nervous. 3Po and Jammy were grinning from ear to ear at the sight of Commando Ubisoft, with his fatigues and nightvision goggles and mysterious-looking doodads strapped to his waist. My heart sank. I hope they don't end up trying out war games.

Until recently, I've been pretty negative about video games. Now that my kids have tried out video gaming systems with an educationaal slant (like the ones for the Leapster and Didj), I've loosened up a bit. Now I consider video games as a form of screen time, in the same category as tv watching, dvd watching and online gaming. It's entertainment that can help kids unwind and relax, and it's harmless in moderation, especially when the games have an educational component. These days my kids get 20 minutes to 1 hour of screen time per day. The length usually depends on how much screen time they've had in the recent past, how much homework or chores they have to do that day -- and I'll admit, how much time I need to work undisturbed. It's up to my kids to choose what form of screen time they want to engage in that day.

But we have much experience with video gaming systems for older kids like the PSP or Nintendo DS. And I still dislike videogames with violence in them. It doesn't matter that kids say they know the difference between the virtual world and the real world, that they would never consider spraying a whole field of people with bullets, or trashing someone else's car. I just think that repeated exposure to that kind of violence desensitizes them to the real thing, and when aggression is glamorized the way it is in violent videogames, kids might become more likely to react with aggression in real life situations because they have absorbed the message that it's what cool people or badasses do.

Fortunately, I'm happy to say that Commando Ubisoft did not make an appearance that day, and that Ubisoft actually has an excellent selection of nonviolent games for kids that emphasize exploration, strategy, creativity and critical thinking rather than mindless violence. And no, the games were not lame-o offerings that would put a 4 year old to sleep after a couple of days. The two games that 3Po and Jammy played definitely look like they would satisfy my young boys' obsession with battles and combat for quite a while -- because what could be more violent and destructive than dragons and dinosaurs?

I'm not naive, and my glasses are not rose-colored. I get that boys like to act out aggression and role-play good versus evil. I know combat can be rough, but at least in the two combat games that 3Po and Jammy played -- Battle of Giants: Dragons and Battle of Giants: Dinosaurs -- the violence stays firmly within a formal combat arena, and it stays firmly in the fantasy/nature realm. Dragons and dinosaurs tear each because it's in their nature to fight, and there's no question of extending this aggressive behavior towards humans. Also, both games encourage critical and strategic thinking when they allow the boys to customize their dragons or dinosaurs to emphasize certain traits that will help them win battles. Based on the 3Po and Jammy's limited experience with these games (they played for just over an hour, and most of that time was spent finding their way around since they have next to no experience playing with the Nintendo DS), I think it's a level of violence I'm comfortable with at this age.

One last point: I'm glad that Ubisoft understands that I'm not the only parent with these concerns. They're trying to get parents informed and engaged on their new Parent's Corner, a website where parents can find all kinds of information related to Ubisoft's games and video gaming in general. For example, parents can ask questions , learn about gaming safety, share experiences, and get age-appropriate recommendations for videogames for their kids. All in all, we had a lot of fun trying out Ubisoft's latest games, and I left feeling more comfortable about easing my kids (and myself) into the world of video gaming knowing that there are games out there that I feel comfortable letting my kids play.

We received sample videogames to try out, but no monetary compensation. The views and opinions expressed here are my own. Stay tuned for more Bonggamom Finds reviews of Ubisoft's lineup of Nintendo DS games for the holidays, featuring games from their Imagine, Petz and StyleLab lines.