I first visited Disneyland when I was 7, so I think it's kind of neat that The Pea's first visit happened at age 7 as well, nearly 30 years later. A lot has changed between now and then:

* Back then, it was just Disneyland and the Disneyland Hotel, not the Disneyland Resort; now they've got lots of other ways to get you to spend money (and have fun doing it, I'll admit).

* Kids are a lot more sophisticated these days. My idea of a wild ride was Mr. Toad's Wild Ride; I really thought that train was going to run us over and I thought the devils at the end were scary (The Pea just thought they were cute). I was too terrified to even think of riding Space Mountain.; The Pea just breezed through it.

* We didn't ever have to wait longer than 10 minutes in line back then. (note the people strolling casually to the front of the line in the photo below; that wouldn't even happen today at 7AM, because people would be stampeding to the boats, unable to believe their incredible luck, hurrying to get the ride over with so they can hurry on to the next ride). Actually we didn't have to line up much this time either, but that was only because of the glory that is FastPass.

* Check out the hairstyles, especially my bowl haircut. Is it any wonder that I've worn my hair long for two decades? 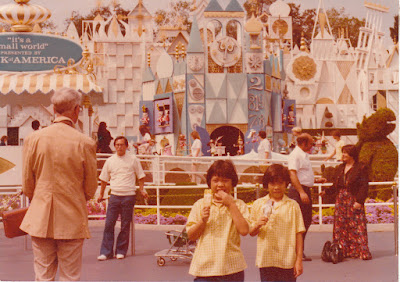 Of course, a lot of things have stayed the same:

* Fashions have come back full circle. Note the stylish bell bottoms and dashing khaki suit. And didn't Angelina Jolie wear that maxi dress when she was preggers with her twins?
* Those topiary hippos still look the same. I wonder if they really are the same plants?

* Space Mountain was just as popular back then as it is now. Ditto for It's a Small World (even though that theme song is still just as difficult to get out of one's head).

* It's still the cleanest theme park on earth. 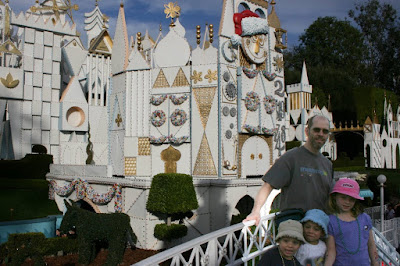 * And still the Happiest Place on Earth.


(about that title -- I'm not actually 37 yet; I tacked 6 months on because it sounds more catchy)
posted on Monday, December 08, 2008 Labels: about me, childhood memories, Disney magic
Email ThisBlogThis!Share to TwitterShare to FacebookShare to Pinterest