How much is the tooth fairy giving? 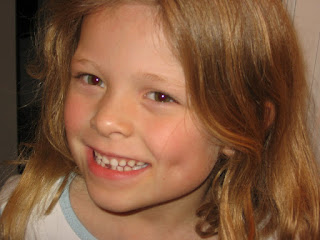 Natalie lost her tooth today! It has been wobbly for a couple of weeks but I didn't expect it to fall out so soon. Neither did she; she lost it sometime at school and didn't even realize it. They searched the classroom but could not find it. She was very concerned that she had nothing for the tooth fairy's first visit. So I suggested that instead of a tooth, she leave a note: 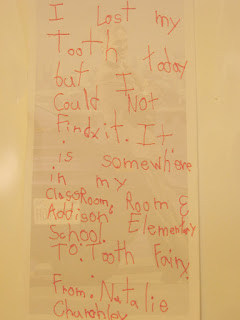 She is convinced that the tooth fairy gives a toy for each tooth; we have been trying to convince her that a dollar would be generous. After all, Graham got a sixpence (worth almost a nickel at today's exchange rates) for every tooth and I got a two-peso coin (worth about 4 US cents). After punching some numbers into MeasuringWorth.com, I found out that Graham's sixpence in 1964 (which I assume was around the time he lost his first tooth) would be roughly the equivalent of $1 today. My 4 cents in 1978, however, would be at most 22 cents today. So if anyone should complain to the tooth fairy, it ought to be me.
posted on Tuesday, February 27, 2007 Labels: childhood memories, kids
Email ThisBlogThis!Share to TwitterShare to FacebookShare to Pinterest

I saw you on Maya's Mom, read your post and wanted to point you to a discussion about the tooth fairy here: http://www.mayasmom.com/talk/1011/how_much_should_the_tooth_fairy_give_per_tooth

oh i'm with you with the complains. i got 25 cents from the tooth fairy for each tooth, now it's so expensive..LOL. lucky kids