I'm aware that marching alone will not bring about change. The march is a beginning, not an end. There is still so much to do (and here's a guide of concrete ways to do it). But it is important for me to go on record as saying I did not approve of these shenanigans. When all of this is over, when people look back and wonder why everyone just went along with the whole thing, I want it to be said that I wasn't one of them. I want to be counted as one of those who said NO. I'm not playing along. I'm giving this president the same amount of respect that Republican politicians gave President Obama for 8 years. Wanting the protest crowds to be larger than Trump's inauguration crowds may be petty, but Trump is a petty kind of guy. So if this is the kind of thing that inflames him (and it is), if my presence increases the crowds and sends him into a Twitter rage, that will be a good start.

Will Trump actually bring about the positive change that he promised to his supporters? Only time will tell, but it's going to be difficult because he's already starting out with a negative balance. Even before his swearing in ceremony, he been a force for negativity (-100 points for angering China and the EU, -100 points for cozying up to Russia, -500 points for the post-election increase in hate incidents).

Strangely enough, Trump has inspired positive change in one aspect of my life: I've learned to knit. Last week I was all over the internet hunting for pink pussy hats to wear to the Women's March, but they were all out of stock. The only solution was to knit one myself. So I taught myself to knit. I made a pink pussy hat for The Pea to wear. I'm working on a second one for me, but I'm such a slow knitter that there's no way I can finish it in time for tomorrow's march. I'll be wearing the beige pussy hat that I bought on the internet, and I'll finish knitting my pink one in time for some other protest march. I'm sure there will be more of those over the next four years! 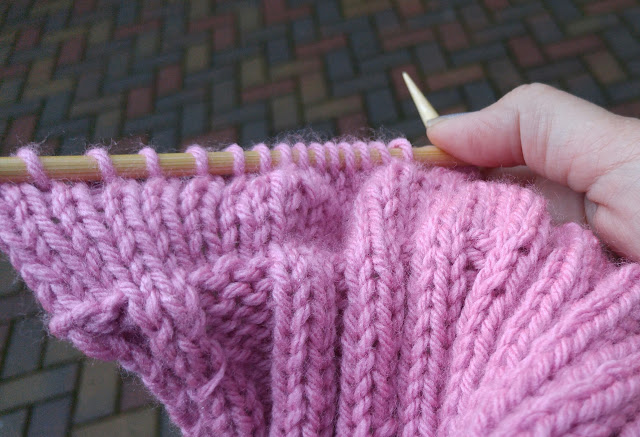 I can hardly believe I'm saying this, but thanks, Trump. If it weren't for you, I wouldn't have learned a cool new skill. I'm still holding onto a thread of hope that there will be other things I can thank you for in these next four years, but it's a very thin thread.

posted on Friday, January 20, 2017 Labels: about me, politics, rants and raves
Email ThisBlogThis!Share to TwitterShare to FacebookShare to Pinterest