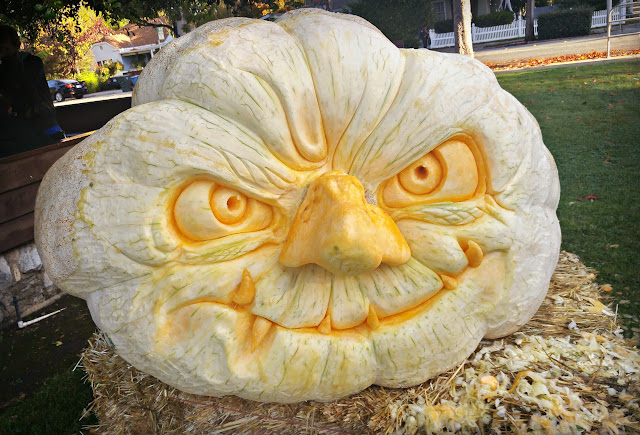 Halloween this year has been a low key -- possibly even no key -- affair. How odd is that? Halloween is my favorite holiday, and for the past 15 years I've decorated the house to the hilt, baked and crafted up a storm, and documented every single bit of it. I just wasn't feeling it this year. Maybe it's because our weekends have been extra busy, maybe it's because the kids are older, maybe it's because I'm older. Whatever the reason, I've ended up taking a break from Halloween. Our only decorations this year were five pumpkins (actually there are only 3 left because we carved 2 of them too early and they rotted. That's why I'm featuring Marissa Mayer's giant pumpkin on this post instead of ours). The only thing I baked this month was a pan of brownies for The Pea's advisory class (they had Halloween sprinkles on them, so plus 3 points for me).

That doesn't mean we're not dressing up for Trick or Treating tonight (hey, I'm uninspired, not dead). The kids must have caught my mood, because they weren't too excited about Halloween costumes... that is, until there were just 2 days left. All of a sudden they came up with all kinds of ideas, so we spent the weekend augmenting their costumes and crafting up a storm. Their costumes turned out great, and all our efforts seem to have reawakened our Halloween cheer! 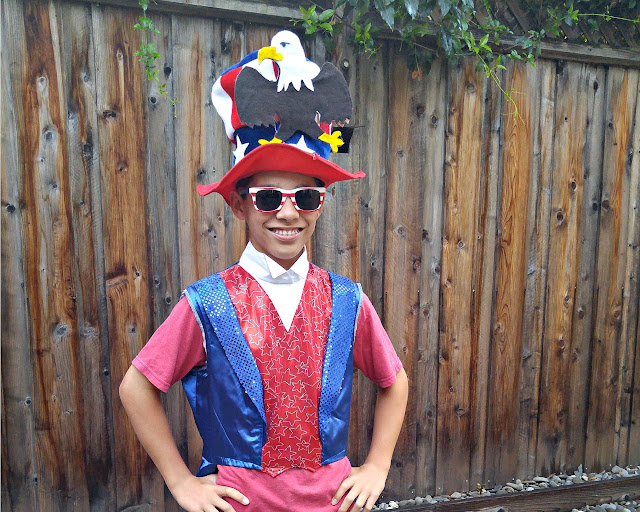 Jammy didn't really have any strong preferences for this year's Halloween costume. We had a big stars-and-stripes hat that we had bought for 4th of July a few years ago, and a friend who was organizing a costume sale for our local children's theatre told me she had 2 identical circus ringmaster waistcoats. Jammy seemed open to the idea, so I went and bought the waistcoat, but he saw a GIRL's name written on the back of the costume. To be fair, the waistcoat did have puffed sleeves, so it may have been a costume meant for a girl. I told him he didn't have to wear it, but when I removed the sleeves, it looked quite unisex, so he said he would wear it. I came up with the idea of making a bald eagle to pin to his hat, and that revved up his enthusiasm for the costume. I thought it looked hilarious! Everyone loved his hat, so everything turned out great. 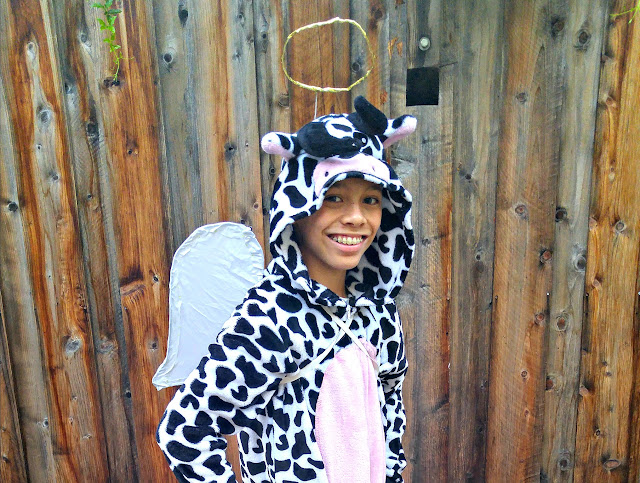 3Po originally wanted to be a mascot this Halloween, and one of my friends was going to lend him a squirrel mascot costume. Then he found out that full face masks aren't allowed at his middle school, so he said he'd rather borrow my cow pajamas and go as his favorite animal, a cow. Yesterday The Pea had a brain wave and said he should go as a Holy Cow, so we spent a few frantic hours making a halo and wings. We used wire hangers to frame the wings and halo. Then we covered the wings with white cloth (from an old bedsheet) and covered the halo with gold ribbon. What an adorable costume! My only regret is that we didn't make a golden harp to go with it. 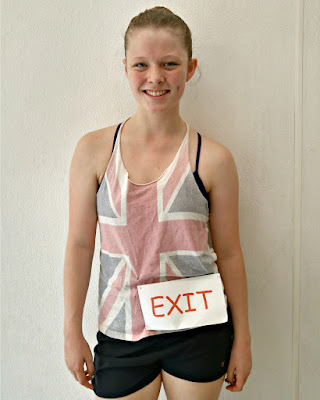 Yes, I do realize that doesn't look anything remotely like a fish tank. The Pea actually had 2 costumes this year, because she needed a costume the weekend before Halloween but hadn't finished her "real" Halloween costume. She DIY'ed this last-minute Brexit costume by pinning an "EXIT" sign onto a Union Jack tshirt. It was cheap, quick, easy, clever, and relevant -- a total Halloween win! We can't actually take credit for the idea; we got it from the TV sitcom "Superstore".

Here's The Pea's "real" costume. The long-sleeved blue dress has become her Halloween canvas -- this is the third Halloween that she has used it for a costume! She has used it to be a Toy Story alien, Cookie Monster, and now a fish tank. Now that she's in high school, she couldn't just be a literal fish tank, of course; there had to be a twist! She made an army tank and an oceanful of Finding Nemo / Little Mermaid sea creatures from felt, then glued everything to the dress. The result is so beautiful that I don't think this dress will be used for any more Halloween costumes; she's going to remove the army tank and keep the skirt as it is. She'll probably wear it to Disneyland one of these days! 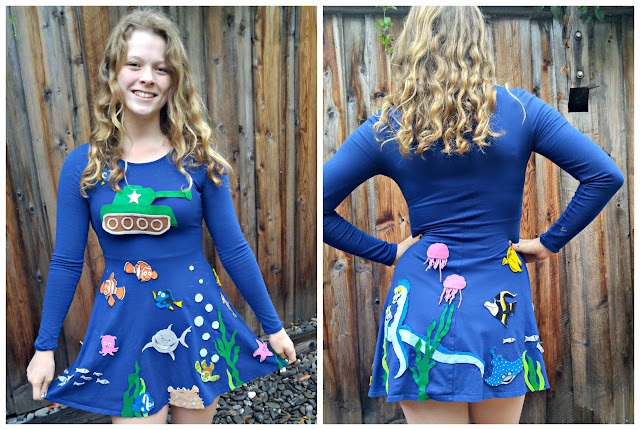 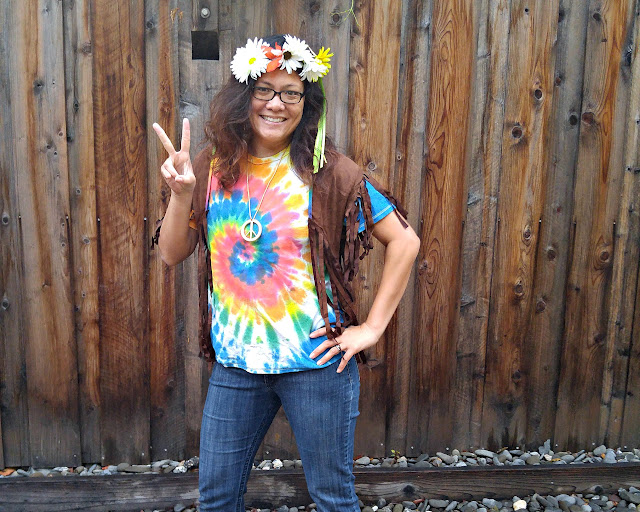 I spent so much time helping the kids with their costumes, there just wasn't time left to plan my own costume -- but I had already decided I was going to wear one of my old costumes, so I didn't care. But when I went to my costume bins, I discovered a hippie costume that an aunt had given me last year. She had visited me last year for a school reunion and left her costume behind because she needed the extra luggage space. The crowning touch: a flower crown from The Pea!

posted on Monday, October 31, 2016
Email ThisBlogThis!Share to TwitterShare to FacebookShare to Pinterest