Will you boycott Ender's Game? 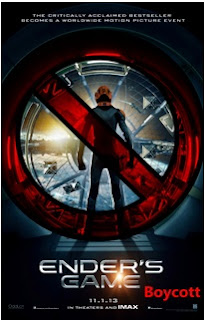 I recently finished reading the sci-fi novel Ender's Game, and it was one of those books that I just could not put down.  After reading it, I immediately bought two more books in the series, and went online to find out when the movie would start showing in theatres.  I was sure the movie would be a certified hit; after all, Ender's Game and its sequel, Speaker for the Dead, won back-to-back Hugo and Nebula awards, and the series has entered the realm of science fiction/ young adult classics.

So I when I Googled "Ender's Game Movie", I was shocked and disappointed to discover the controversy surrounding the book's author, Orson Scott Card -- there's a big movement to boycott the Ender's Game movie because of his position on LGBT rights.

Well, that was a certainly a surprise. It's quite ironic that an author who writes about life in the future would hold such prehistoric views.  I certainly couldn't tell from the book.  In fact,some of the themes of the book include tolerance for people who are different from you, empathizing with others, finding a way to communicate, and working together.  Discovering Orson Scott Card's hateful anti-LGBT views after reading Ender's Game was like devouring a Death By Chocolate cake... then discovering that the molten chocolate part in the middle had been riddled with maggots.

And yet, knowing that the author has such a hateful side, I went ahead and read -- and loved -- Ender's Shadow.  And I really, really want to watch the movie.

Does that make me a hypocrite?  I could not care less about people's sexual orientations; let people love who they want to love.  I am a firm believer in equal rights for everyone.  I have supported the LGBT cause on my blog, on social media, in rallies and marches, in the voting booth, with my checkbook, and with my shopping dollars.  I cannot in good conscience support the Boy Scouts, the Salvation Army, Chick-Fil-A or Barilla Pasta.  So why should I support this movie?

The difference between boycotting Ender's Game and boycotting all those other companies is that there are alternatives.  I can buy Bertolli or Ronzoni pasta.  I can donate to Goodwill or The Red Cross.  And I can always clog my arteries with Kentucky Fried Chicken or the McChicken sandwich.  But in order to immerse myself in Ender's world, I have to cross paths with Orson Scott Card.

That's the "problem" with art: it's unique.  It's easier to make a statement with consumer products than it is with art.  Art is unique, and I think it's possible to appreciate the art without appreciating the artist.  Think of all the scumbag artists whose work people glorify.  Roman Polanski is a child rapist.  Jack London is racist. Mel Gibson is anti-Semite. Even Dr. Seuss made openly racist ads early in his career.  Ernest Hemmingway is an all-around asshole.  And if homophobes want to boycott LGBT-friendly companies, they would never be able to watch a Hollywood movie!

That's another good point:  Out of everyone involved in the Ender's Game movie, Orson Scott Card is probably the only homophobe.  The rest, like almost everyone in Hollywood, are probably equal rights supporters.  Boycotting the film won't hurt Orson Scott Card the way boycotting Barilla Pasta would -- but it might hurt the writers, film crew, backstage crew, and everyone else.

Writer Diane Anderson-Minshall has an excellent analysis of why she's going to see Ender's Game.  She's a gay activist, and she makes some great points.  Maybe I think they're great points because they soothe my conscience, but whatever.  Hate the author, love the book, hoping to love the movie.  That's my line, and I'm going to stick with it.

Ender's Game is certainly one instance where you hope life will imitate art.  At the end of the book, (spoiler alert!!), Ender has blown up an entire alien race (called "Buggers" -- maybe the only anti-gay concept from the author that made its way into the book?) and realizes they never meant Earth any harm, that the whole mess started because neither race could communicate with each other.  He spends the rest of his life atoning for it.   Now that's a message worth reading a book for -- or seeing a movie for.  Hopefully Orson Scott Card can learn from his own character.