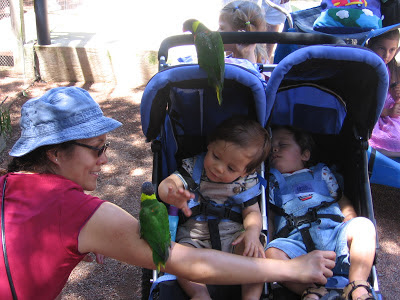 When I told the kids we'd be taking them to Marine World, they had no idea what I was talking about.  "You know, that theme park we always pass by on our way to Tahoe or Napa".  "Oh, you mean Six Flags?".  "Yeah, that one".  See, it used to be called Marine World Africa USA.  That's what it was called the last time we visited.  Yup, it has been a while.  They don't even remember their last visit.

The park has changed quite a bit since we last visited eight years ago. Actually, that's probably not true.  They've added a few more roller coasters but it's still a mix of thrill rides, family rides, animal shows and animal encounters.  No, Six Flags hasn't really changed all that much.  We're the ones who've changed. 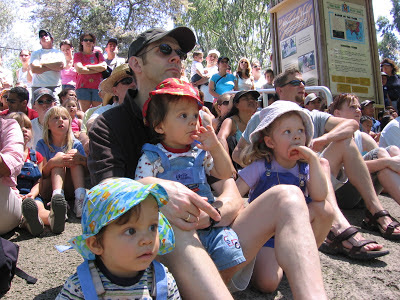 Eight years after that last visit, our priorities are different.  Back then our goal was to see birds, elephants, tigers and dolphins.  This time around, all the kids wanted to do was ride as many roller coasters as possible.  They've been asking us to take them here for quite a while, but Alfie and I resisted because 3Po and Jammy weren't tall enough to go on the tallest roller coaster rides, and we wanted to avoid the heartbreak of last year's visits to Great America, when 3Po was just barely tall enough... and Jammy just barely wasn't. Happily, both boys made the height cutoff this year with room to spare, and we celebrated by riding the  biggest, baddest roller coasters one, two, three times.  The park was pretty crowded, but we splurged on a Flash Pass so we didn't have to wait it line.  The Flash Pass works a bit like Disneyland's FASTPASS sytem; it basically holds your place in line and lets you do other stuff instead of actually standing in line (your return time is based on the estimated wait time). In between coaster rides, we got our fill of animal shows and animal encounters.  The killer whale show we watched eight years ago is gone; now the headline show is Cirque Dreams Splashtastic, a Cirque du Soleil-type acrobatics show blended with a dolphin show. I loved the acrobats, but I thought the dolphins in the regular dolphin show were far more impressive than the ones in the Cirque show. ... got up close and personal with some sting rays.... ... and interacted with other forms of animal life. Being the cheapskate that I am, it hurt to spend the extra money on that Flash Pass, but it more than paid for itself because we were able to do the things we love now as well as the things we loved eight years ago (and still do).  We had a great day, and I hope we won't have to wait eight years for our next visit!

For more tips on making the most out of your day at Six Flags, check out my Six Flags post on Silicon Valley Mamas

posted on Monday, July 01, 2013
Email ThisBlogThis!Share to TwitterShare to FacebookShare to Pinterest